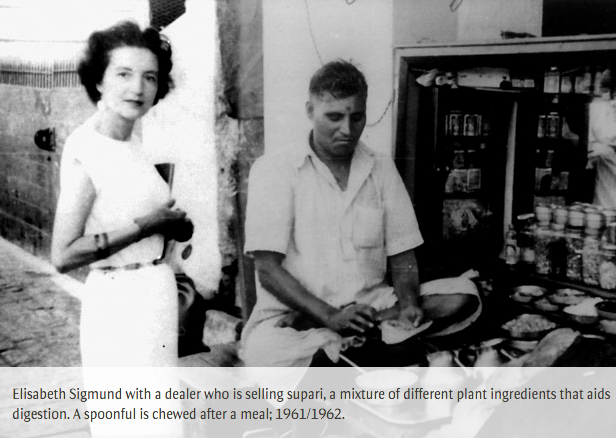 A year in India: a time of study

Elisabeth Sigmund, co-founder of Dr. Hauschka Skin Care, took a one-year research trip to India from 1961 to 1962. She was given this opportunity by the son of a friend who was studying yoga in India. Elisabeth Sigmund learned how colourfully different India could be (and still is today). She visited temples and observed the varied street life. In the eyes of the Indians, she was an exotic stranger.

At the beginning of the 1960s, it was unusual for a woman to travel alone. Elisabeth Sigmund was given the opportunity to travel to the then uncommon destination of India without her husband, who was working full-time, by Hasse, the son of a friend who had intensively studied yoga in Stockholm. While he was furthering his knowledge of yoga in India, Elisabeth Sigmund was able to visit him. She travelled to New Delhi and Mumbai among other places and spent many hours in the Mumbai University library, where she found books on nourishing plants and other natural materials with an effect on skin that could not be obtained in Europe.

Cosmetics production the Indian way
In addition to her theoretical work, Elisabeth Sigmund investigated the Indian cosmetics market and came across packages of Ayurvedic herbs with poetic advertising: “If you use this cream regularly you will become as bright and beautiful as the full moon.” She also came into contact with products that are damaging to the skin, for example a day cream named Himalayan Snow, a bleaching cream that could result in unsightly eczema, as Dr Kaura informed her. Once she had run out of her own cosmetics, Elisabeth Sigmund produced cosmetics adapted to the Indian climate. For example, she could not get any sage so instead produced a foot bath using camphor. She also made a rose cream for Dr Kaura’s wife. She found the ingredients for her skin care products in a quarter of Mumbai where she was able to buy plants, beeswax and essential oils.

An offer to stay
A wealthy man who was an acquaintance of Dr Kaura’s offered Elisabeth Sigmund the chance to open a beauty salon in Mumbai. He said that he would send plenty of customers her way and in two years she would be a wealthy woman. He would also find a job for her husband. Elisabeth Sigmund thanked him for the offer. The year spent in India had been very important to her and she had learned a lot, but one year was enough. It was not somewhere she wanted to stay forever and build a new life.

Thanks for reading our blog. xx